The Citgo sign has a dark side. Should that matter to Boston?
Mar

The Citgo sign has a dark side. Should that matter to Boston?

The beloved sign has uncomfortable foreign ties. But for many Bostonians, the sign is a symbol of the city itself.

On a mid-August night in 1983, the Boston Red Sox were playing the Texas Rangers at Fenway Park. It turned out to be a good night for Boston fans not just because the Sox won 4-2, but because the beloved Citgo sign visible over the left-field wall — which had gone dark in 1979 during the energy crisis and hadn’t been turned on since — was ceremoniously illuminated during the seventh-inning stretch.

In the eighth inning, Tony Armas stepped up and, as reported by a Boston Globe sportswriter, hit a “booming home run over the left-field screen, a shot that seemed in danger of hitting the newly relit Citgo sign.” Outside of the park, about 750 people had gathered in Kenmore Square to watch the sign glow as loudspeakers blared the song “You Light Up My Life.”

Score one for Boston sentimentalism — and count me in. Like so many, I’ve admired that blinking red triangle from vantages both inside and outside of Fenway. It’s the beacon of Beacon Street. It’s the essence of a landmark.

Boston officials are now considering making the sign a city landmark, an act that would permanently enshrine it as an untouchable part of our landscape. Most people in Boston would hate to see the sign go dark again. But it’s worth pausing to consider the unsettling geopolitical baggage that comes with it.

Since 1990, Citgo has been owned by Petroleos de Venezuela SA, the nationalized oil company that, for many years, supported a booming Venezuelan economy. But lately, due to rampant corruption, Venezuela has been reeling, its oil production has plummeted, and PDVSA is “on the brink of collapse,” according to a New York Times report from December. Venezuela’s socialist president, Nicolas Maduro, says he is purging corruption: In November, six top Citgo executives (four of them naturalized American citizens) were arrested on charges of embezzlement. Then Maduro put a general with no experience in the energy industry in charge of the national oil company and the nation’s oil ministry. He appointed a cousin of former Venezuelan strongman Hugo Chavez as the new head at Citgo’s Houston headquarters. 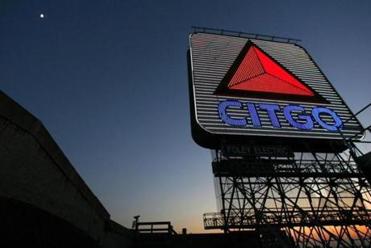 And to make the story more ominous, PDVSA is reportedly in debt to the Russian state oil company Rosneft — which is effectively controlled by Vladimir Putin — to the tune of about $6 billion. That’s led to speculation about whether PDVSA, and thus Citgo, might ultimately end up partly or wholly owned by Rosneft.

Does knowing this make me less sentimental about Boston’s Citgo sign? Maybe slightly. But at some point after the sign was first lit up in 1965, Bostonians began to see it as something other than an oil company’s brand in lights. Some appreciate it as pop art, or at least as an especially appealing commercial design. It’s no mystery why people separate the sign from the oil company — it symbolizes other things besides gasoline.

The sign became a part of how people experience the Boston skyline, or, at least, life in Kenmore Square. A line from political scientist Murray Edelman’s classic 1964 book, The Symbolic Uses of Politics, explains it perfectly well: “Every symbol stands for something other than itself,” he wrote, “and it evokes an attitude, a set of impressions, or a pattern of events associated through time, through space, through logic, or through imagination with the symbol.”

When the sign was on the verge of being dismantled in late 1982, the public outcry caused Citgo to realize they had something almost priceless: an advertisement that people seemed to cherish.

More recently, there was another flurry of concern about the future of the sign. In 2016, Boston University sold the building with the rooftop that supports the 60-foot-by-60-foot sign to a development company, and the terms of Citgo’s lease had to be renegotiated. The Boston Landmarks Commission began to draft a report, still in progress, about the pros and cons of giving the sign protected status. It turned out that the developers, the Related Beal company, reached a deal with Citgo to keep the sign in place “for decades to come.” (It’s not a new debate: In 1983, the commission voted against designating the sign as a city landmark, arguing its owners shouldn’t have to bear the financial cost of keeping it functioning.)

Thirty-three years after the Venezuelan-born Armas hit that booming home run, I had my own idyllic August night at Fenway. Two summers ago, I was at the park with three friends and we watched the Red Sox, with Rick Porcello on the mound, defeat Tampa Bay. Mookie Betts hit a home run that bounced off of a billboard above the Green Monster.

After the game, I walked onto the bridge over the Charles River and stopped to stare at the Citgo sign. I took out my camera and started taking pictures.

At night, the light show is mesmerizing. The Citgo logo’s horizontal white stripes light up one by one, while the red pyramid shrinks and slowly reassumes its space. And then the whole sign winks.

The images came out like abstract paintings. The lights of moving cars and trucks made streaks around the triangle, which seemed to be floating in the night sky.

Even if the city eventually steps in to protect the sign as a landmark, the logo and the sign itself will always be the legal property of some commercial entity. Yet there is some kind of public ownership, too. Is it only sentimental?

What would it be like if that blinking red delta existed only as a giant work of public art? What if its existence didn’t depend on the rising and falling fortunes of developers and oil companies? One photo I took that night captured the sign just when the white background was fully lit up. The five blue letters at the bottom had disappeared into the white. That’s the image I like best.